Lately, it appears that Hillary Clinton has pointed fingers at everyone but herself for the reason she failed to secure the title of commander-in-chief in the 2016 presidential election.

In a recent interview with CNN's Christiane Amanpour at the Women for Women International conference in New York, Clinton stated: "Of course, I take absolute personal responsibility" for the presidential loss, and explained, “I was the candidate, I was the person who was on the ballot."

Yet, she continued on to put the blame on every other factor she could think of.

"It wasn’t a perfect campaign, there is no such thing, but I was on the way to winning until a combination of Jim Comey’s letter on Oct. 28 and Russian WikiLeaks raised doubts in the minds of people who were inclined to vote for me but got scared off. The evidence for that intervening event is, I think, compelling, persuasive, and so we overcame a lot in the campaign."

Clinton also went on to boldly declare that “If the election had been on Oct. 27, I would be your president.”

But, while Clinton may be under the impression that her campaign was deliberately sabotaged, White House adviser Kellyanne Conway want her to step up and accept the loss instead of continually making excuses.

She even took to Twitter to proclaim that Clinton's "Lack of self-awareness is stunning," and concurred with Amanpour’s question of "What was your message?"

Conway also took the honor of specifically listing all the reasons the democratic candidate lost to President Trump, signing off the tweet with the subtle jab "From: Woman in the White House," just to reinforce that she herself had made it to the nation's capital after leading Trump's winning campaign. 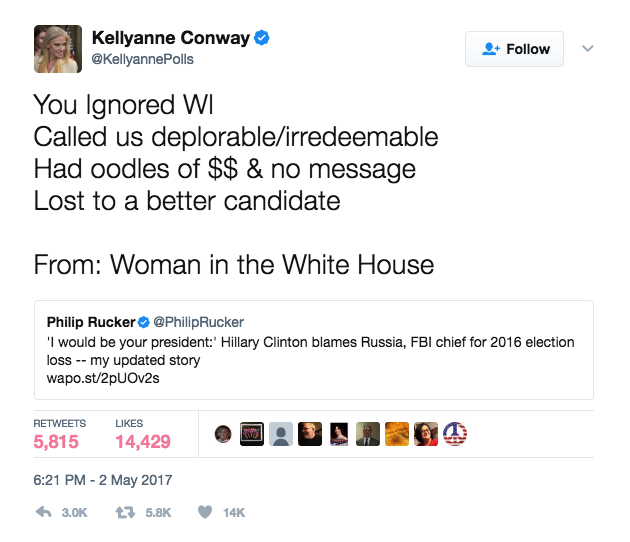